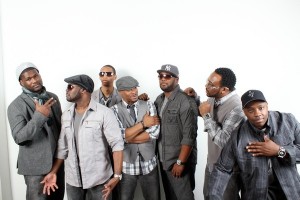 The origins of the group date back to New York City in 1999 when Roger Thomas started the group with his brother, Warren, and five other talented singers they had come to know over the years from singing around the city. Having been in and out of several traditional male groups over the years, Roger developed an affinity for a cappella sounds and a unique ability to create distinct harmony arrangements. When invited to sing at a major a cappella competition in New York, they won the competition, moved onto the nationals and took away two more wins.

Riding the wave of this newfound success and still unable to decide if Naturally 7 were going to be an a cappella group or a traditional band, Roger had a novel idea: they could be both.

He remembered as a child, his brother Warren always wanted a drum set but their mother always told him no because it was just too noisy. So Warren learned to make true drum sounds, with different ways of making the kick, toms, snare, cymbals, and other drum sounds, to compensate for not having real drums to play. Roger approached Warren with the idea from their childhood, and asked if he could become the band’s drummer, so to speak, to accompany Naturally 7 on up-tempo songs.

The idea evolved, and the other band members found unique aspects of their own voices to determine which members would BE which instrument. After all, Roger thought, if the human voice truly was an instrument, it should not matter which instrument it needed to be. And for Naturally 7, it really didn’t matter; “VOCAL PLAY” was born. What is the difference between Vocal Play and a cappella? A cappella is defined as singing without instruments. Vocal Play is singing AS instruments, and BECOMING an instrument with the voice.

What makes Naturally 7 special, is that every instrument sound that they sing is created from the human voice. There are no actual drums, guitars, horns, flutes, or any other instrument that is heard when listening to them perform; it’s the band members playing each of their vocal instruments.

The group has recorded a number of CD’s over the years – “Non Fiction” (2000) the aptly titled “What Is It” (2003), “Christmas… It’s A Love Story” (2004) and “Ready II Fly” (2006). The latter contains the YouTube-hit “Feel It (In the Air Tonight”). Naturally 7’s now famous Paris subway performance of the song, has received over four and a half million hits on YouTube alone and the number of people discovering the group, adds to that figure daily. The song turned into a Top 3-chart- success in France, Belgium and South Africa and made the single charts in other European countries, such as Germany, Switzerland, Italy and Portugal.

In January 2009, the group released a special album, ‘Wall Of Sound’ exclusively for the UK and Ireland, to commemorate their participation at the ‘Royal Variety Performance’. The album contained known material from previous albums, as well as 5 brand-new tracks and entered the British Album-Charts in the first week after release at #29.

They have appeared on The Late Late Show with Craig Ferguson, performing “Stardust” with Michael Bublé. In November 09, the group travelled to Bermuda, taking part in Quincy Jones’ 2009 Bermuda Music Festival performing before an enthusiastic crowd!

February of 2010 saw Naturally 7 spend three weeks in Vancouver as performance guests during the Olympic Winter Games and in March they returned as Special Guests on Bublé’s ‘Crazy Love’-Tour around the World! 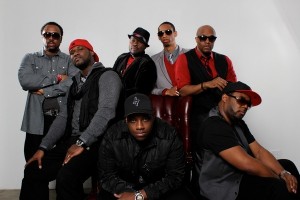 Naturally 7’s latest CD/DVD ‘VocalPlay, contains self-penned originals such as “SOS (Anybody Out There),” power ballad “If You Love Me”, the Motown-influenced “Ready or Not”, the Latin 768 and a duet with Michael Bublé on the Dinah Washington classic, “Relax Max”. The bonus DVD includes HD Live material from their Madison Square Garden performance, extensive interviews with each group member as well as their video clips.

In the fall of 2010 Naturally 7 along with Ludacris were featured on the title track of Quincy Jones’ new CD – Soul Bossa Nostra that led to a performance on The View in November.

They continue to tour the world with Michael Buble, receiving standing ovations nightly and rave reviews:

“Openers Naturally 7, a seven–piece vocal group from New York, who at one point joined Buble during his set, delivered a jaw-dropping vocal symposium. To call them an a cappella group would be a gross understatement, for they performed songs with trumpets, electric guitars, bass cello, harmonica, a full drum kit, and more – using only their voices. It was like a striking optical illusion, only aural.” (Boston Globe, Nov 2010)

“Rarely does an opener melt the crowd like Naturally 7 did. By the time their half hour set ended, all too soon, many jumped to their feet to give the stellar musicians a standing ovation.”

As 2011 unfolds, Naturally 7 will have toured Europe, Australia, Canada and the U.S. In February they performed at the BET Honours, receiving a standing ovation for “Rockit” their Herbie Hancock tribute song and the group will make a return appearance at the Playboy Jazz Festival taking place the Hollywood Bowl this June.

Their phenomenal talent, coupled with a live show that many consider to be one of the best in the world, has Naturally 7 poised for a brilliant future.